All Diets Catered For

A professional catering company for those who love good food and memorable occasions.

The history and culture of gastronomy are at our fingertips to provide you and your guests with an unforgettable culinary experience.

Specialising in wedding receptions and corporate events, with the history and culture of gastronomy at our heart, our work is a source of inspiration.

In a world of accessible international cuisines and multicultural influences, we owe our skills to those who played a fundamental role in the development of classic cuisines and the art of catering.

Never static, like music and the visual arts, our cuisine never ceases to evolve. From intimate gatherings to elaborate feasts, we are multi-layered in our approach and embrace new trends in the context of dishes. Our cooking reflects customs of age and present-day eating habits and preferences.

With an uncompromising approach to quality, Citreus Catering is the perfect accompaniment to your wedding day.
Following the main event, our locally sourced, authentic produce will be deliciously transformed without inhibited creativity to become an integral part of your memorable day. 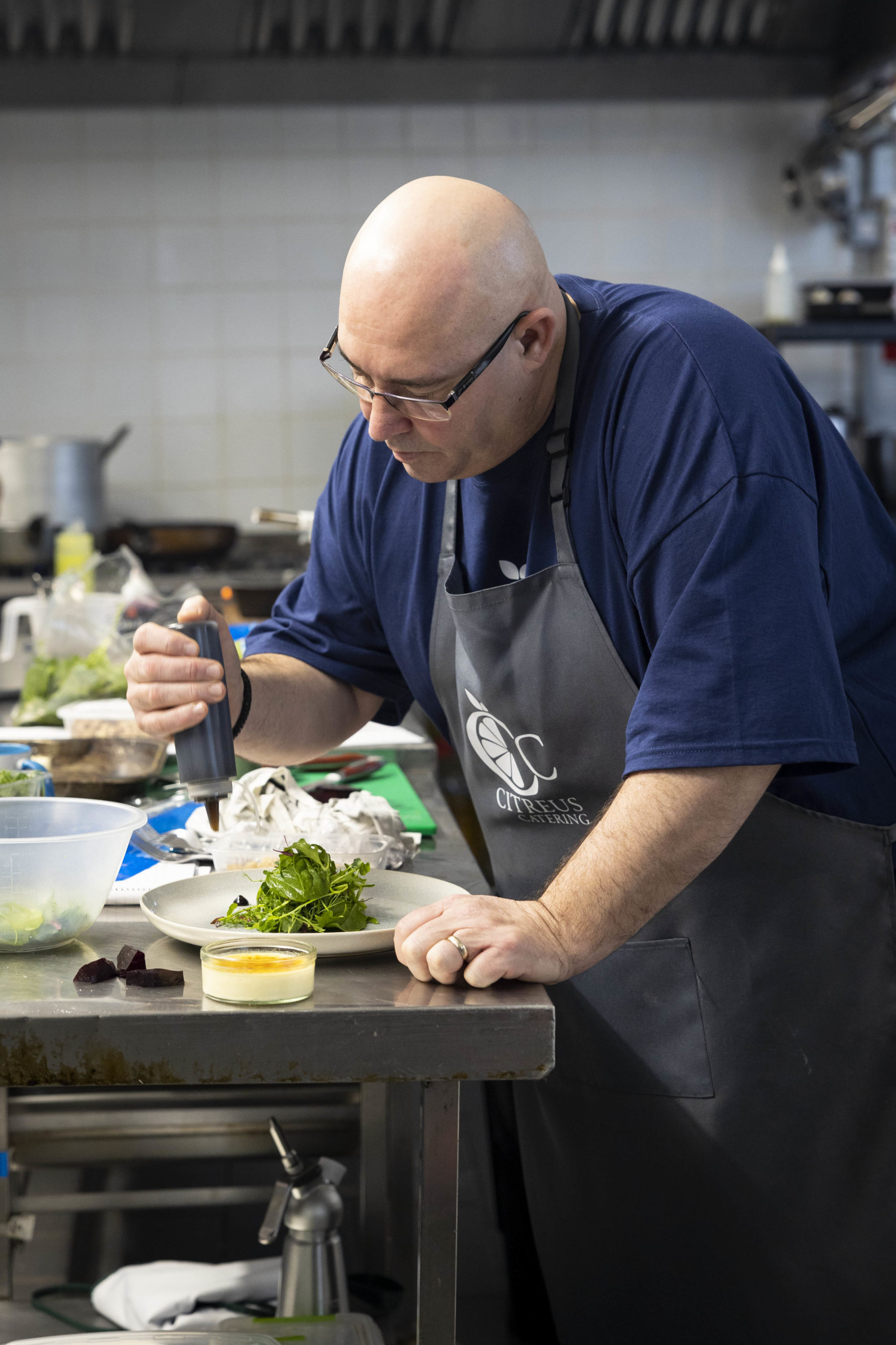 Another product of the prestigious Cornwall Catering College, Tim is very much part of a strong culinary heritage that boasts a reputation for excellent food.

The Cornish peninsula is surrounded by a sea of well-stocked fish and is often associated with great celebrity chefs. Rick Stein, Jamie Oliver, John Torode and Nathan Outlaw have all made their mark on the region. ​​

After graduating in 1984, Tim moved to London and worked for the RAF club in Piccadilly, under the guidance of celebrated, Gibraltar head chef, Lionel Artisani.

Tim progressed to be second in command at De Beers, in the City of London, working as Sous-chef before starting a family and embarking on his outside catering project in Cambridge.

Although Tim was becoming nationally renowned with a reputation for main courses, he focused on buffets and cricket teas, with seasonal, outdoor banquets thrown in to add versatility to his already expanding repertoire of culinary skills.

With an aptitude for handling pressure and busy kitchens, Tim became the Executive Chef at Marriott Hotels. Here he led a team of 14 chefs, covering a multitude of hotels within the chain.

The Marriott chain then launched a marketing campaign consisting of fine dining menus within its hotels. With Tim at the helm, he stayed with Marriott Hotels for a further two years before moving into contract catering with ESS (compass group).

His role as ESS was to preside over 5 kitchens across 2 RAF bases, including summer balls for 1000 people, fine dining in the Officer's Mess, and menu creation for the other units.

Always aware of emerging tastes and trends in the culinary world, Tim witnessed the evolution of street food whilst working in London. He quickly responded with a revolutionary initiative that eventually gripped the nation.

In July 2016, Tim's reputation followed him to the East Midlands where he would eventually team up with local chef, Craig Floate.

After studying at a prestigious catering college in Nottingham, awarding-winning chef, Craig Floate, quickly rose to prominence as an authority on the corporate food scene.

Working his way up, Craig moved from working at bistros to exhibiting his array of culinary skills at large corporate events.

With a vast experience to bring to the table, it was no surprise to see Craig's passion for food and wine on display at some of the biggest and best sporting events in the country.

From football and rugby stadiums to music festivals and racecourses, it was apparent that Craig's skill and commitment to excellence were in high demand.

Gaining a reputation as a chef beyond his years, Craig has provided fine dining experiences for guests at Royal Ascot, Cheltenham Race Festival, Wimbledon and the British Golf Open, cementing himself as an authority in the catering industry.

Never content with conventional methods, Craig is not afraid of a challenge and takes the food game to the next level. His ability to reinvent the classic dishes aligns him with the best avant-garde chefs in the region.

Seeing the possibilities that innovation holds for cooking, Craig's flavour combinations bring new appearances, textures, and a fresh personality to a multitude of intimate or extravagant events alike.

Craig won private chef of the year in 2020/2021 for the Great food awards club, wowing judges with consistency, flavour and innovation of the business when lock down hit.

Working closely with Tim they launched Citreus catering in 2021 and the awards and accolades are sure to follow in due course.